You are invited to join us in celebrating an exciting new large-scale community mural in honour of the Portuguese community in Toronto.

We extend the invitation to the entire community to participate in our public inauguration and celebration of the vibrant creative neighbourhood of Little Portugal on Wednesday December 19 at 1357 Dundas St. West at 2pm.

The design of this mural brought together diverse members of the Little Portugal community to create a visual celebration of the contributions of the Portuguese community in Toronto.

The artwork, titled “Portuguese Fisherman”, depicts a traditional fisherman from the Nazaré region of Portugal.The mural project engaged youth from communities within the Dundas West Area in educational and mural painting workshops at Alexander Muir Public School, in which artists from Valparaíso had the opportunity to work with students and community members to explore the mural creation process.

Located at 1357 Dundas St. West, the mural was produced by Rodrigo Ardiles, and painted by international artist Pablo Gomez. This collaborative effort, another showpiece for the Dundas West Area, celebrates visual arts, and reinforces Toronto’s reputation as a centre of creativity and innovation – Diversity Our Strength!

This mural project is supported and funded by the City of Toronto’s StreetARToronto Program, the Toronto Arts Council, the Canadian Embassy in Chile, the Chilean Consulate in Toronto, the Municipality of Valparaiso (First Nations Office), the Dundas West BIA, the Little Portugal BIA, the Lula Music and Arts Centre, Creativo Arts Collective, CASAT, TDSB, FilmInChile, the Memorial Museum of Chile and the “Valparaíso En Colores” NGO Initiative.

The initiative builds on mural art previously created in the Dundas West neighbourhood by both local BIAs. These public art works have been included in many guided walking tours and help to promote sustainable and creative economic growth in the area. The works will be become part of the collection of the Dundas West Museum, an innovative open air street Museum on Dundas West which will launch in early 2019. Spearheaded by Creativo Arts Collective, as well as the Dundas West and Little Portugal BIAs, with support from the City of Toronto’s Economic Development Department, the Museum will also have a digital component through a website and mobile app. Watch for further developments using the tag @dundaswest.museum. 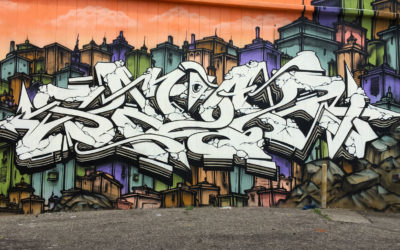 This mural represents the large community of Portuguese people and businesses that reside within the Little Portugal Area. It also represents a merging of the youth within the community, as graffiti art is considered a relatively new art form created by predominantly youth. 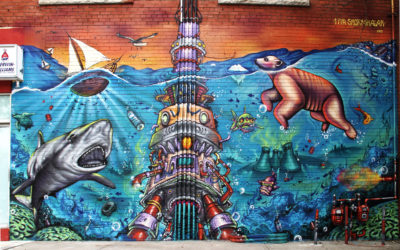 The Essencia Arts Collective believes that art can be a tool for social change and community empowerment. With members from across six continents, Essencia expresses itself from a unique and global perspective. Having over 10 years experience working in diverse communities around the world, the collective has run artistic projects with youth, first nations, refugees, immigrants, prison inmates, galleries, and festivals. Essencia encourages artistic storytelling, and expresses itself through muralism, street art, graffiti, graphic design, photography, video, music, poetry, dance and love! 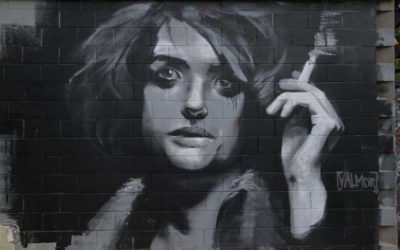 Located at the north laneway behind Dundas St. West, between Dufferin St. and Gladstone Ave. lies a beautiful grayscale portrait of a women smoking. The drip technique can be observed in this artwork, as the gracious expressions are elegantly placed in the composition.

Our community is blessed to have such great talent present. We thank the artist for his inspiration and art.